Pawel Otulakowski wrote to us: “Hello! I am Polish man who travelled to Ukraina to find family roots. Some of them are in Kyseliv. This is what I find near the village – monument without inscriptions (photo). I heard from local people history of this tragedy. Germans takes all jewish people from two twin villages – Kyseliv and Borivtsi (Kisielów i Borowce). They find also few Ukrainians who for promise to take all goods from victims agree to shot them. But they were usual people who don’t know how to kill. So they shoted even few times and they don’t kill some persons. Germans look for this and have fun that ukrainians do that “unprofessionally” . Died and alived – all were throwed to the little water eye that was deep in this time. There were corn around and few people saw everything. Everybody knows who were murderer but they lived without any consequences. Now they are die. I think You have to know about this and hope that monument will be repaired. There is also few macevas/gravestones in Verenchanka (Werenczanka) cemetery (photo).” 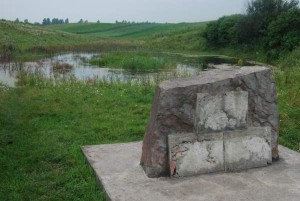 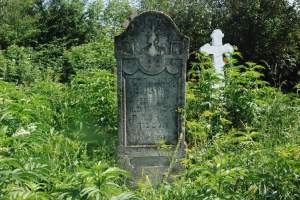 First I thought it is off-topic and off-area, but on closer examination I learned, that it is at least not off-area, as Kyseliv, Borivtsi and Verenchanka belong to the Czernowitz region and the Kitsman district. Above all, it can’t be off-topic, as similar brutal massacres happened in the whole area and – as Jerome mentioned – “it is one of those horrible, believable stories that is crying out to be heard, regardless of where it took place.”